Our good friend and cycling pal, KDHL, generously wrote about her experience doing the NOLA to Angola Ride. We think she is really cool for organizing and doing this ride, and extra cool for writing us an article about it and sharing these great photos.

From October 19-21st, 40 riders and support drivers traveled from New Orleans to Louisiana State Penitentiary on the Nola to Angola ride. The point was first and foremost to raise money for Cornerstone Bus Builders Project which provides free buses for friends and family to visit their loved ones at prisons around the state of Louisiana. Each bus costs about $1,000.00 and the more money we raise, the more buses they can send. This was the third year of the ride and we destroyed our original fundraising goal [about $12,000], raising $23,000.00 for Cornerstone. Our secondary goal is to raise awareness around the Prison Industrial Complex, especially by travelling to a place that was so easily converted from plantation to prison. Riders are covering a distance on bicycles that for some people would never be crossable without free transportation. Reading and movie nights were held throughout the year for educational outreach and some riders were linked up with pen pals in Angola to emphasize these points.

This was my second year on the ride and my first year as an organizer. Everything for NtA is straight ground up. Our spoke cards were made on lunch break and riders brought clothing to the pre-ride potluck to screen print themselves. Food committee and volunteers were baking bread and blending hummus in a Mid-City kitchen the night before we left. For navigation, everyone got a copy of the hand-drawn map booklet that they knew to keep in a safe place. Support cars along the way were driven by gracious friends with excellent bike mechanic and/or motivational skills. Additionally, we met multiple times with the West Feliciana Sheriff Department to address their multitude of concerns about having cyclists on the road. At some points new routes had to be planned. FINALLY the weekend of the ride came. 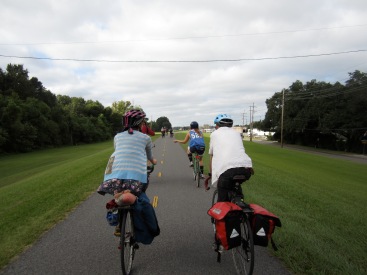 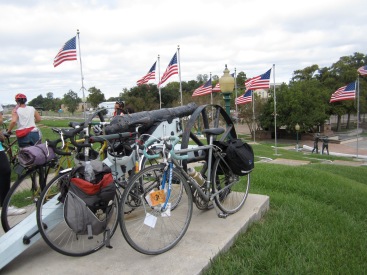 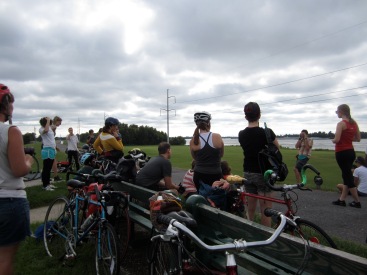 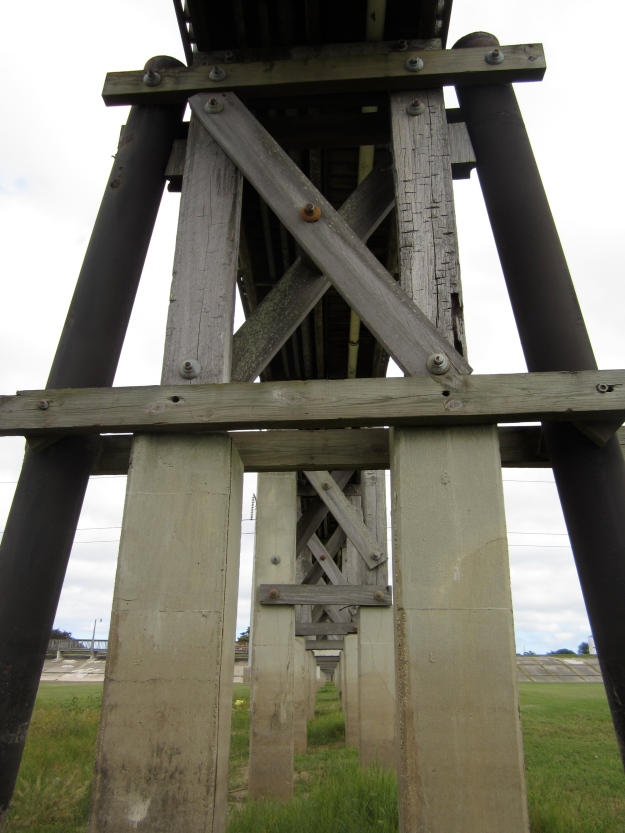 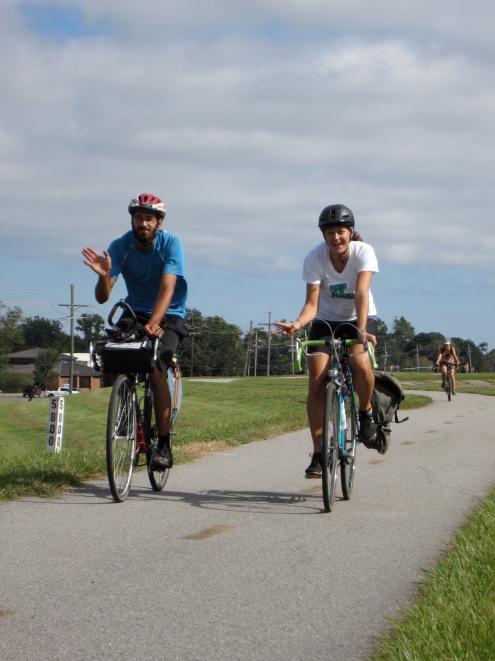 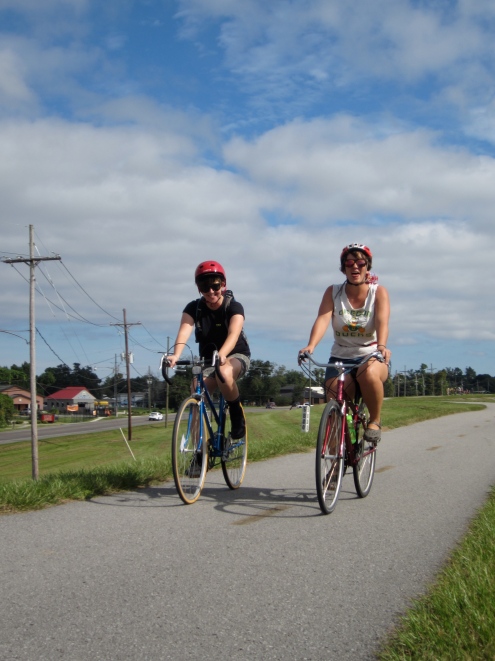 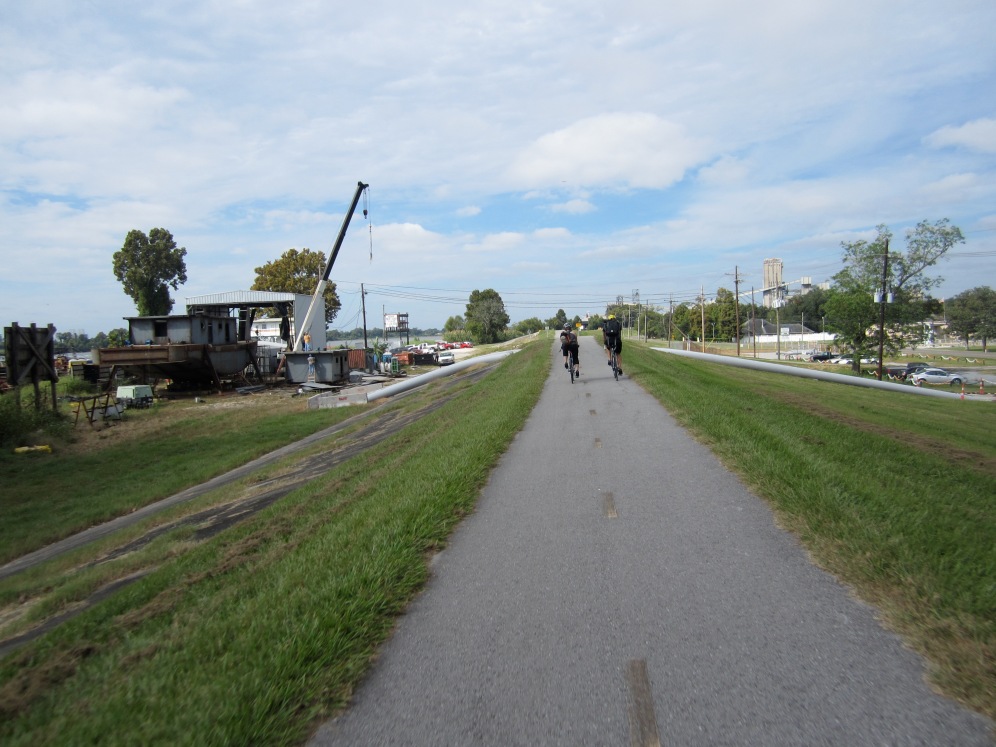 Our route started at Orleans Parish Prison where many of the men in Angola begin their incarceration. Once upstate, about 90% of the prison population of Louisiana State Penitentiary will die there. From OPP, we took the uptown levee all morning until we stopped for lunch at Destrehan Plantation. Here we learned about the case of Gary Tyler, who was convicted in 1975 of murder at age 17 and has been fighting with the help of numerous human rights groups to prove his innocence ever since. Where the levee path ends is one of the strangest stretches of landscape for me, the Bonnet Carre Spillway. One of the organizers, Scott Eustis, educated us along the route about the environmental aspects of what we’d pass and the spillway is one of the most interesting stories. We got to shred through this area where fields that are sometimes purposefully flooded stretch out with a backdrop of oil refineries and distant farm houses. From there, past the lil Zapp’s chippery in Grammercy and on to the St. James Boat Club where we camped for the first night. Our bike mechanics spent most of the night handling anyone’s adjustments and I caught Liz, co-founder of RUBARB, sneaking around checking and filling people’s tires for them. 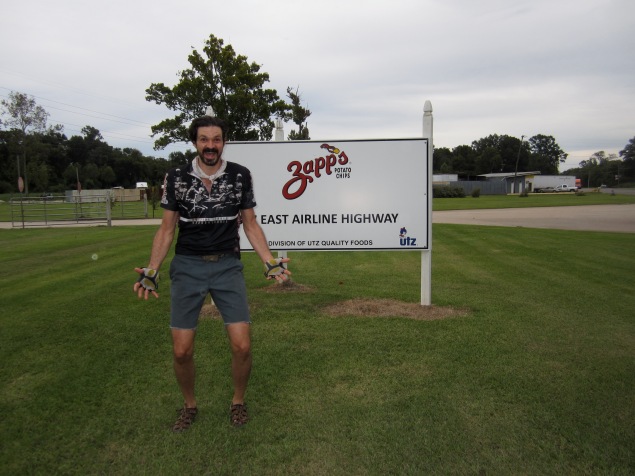 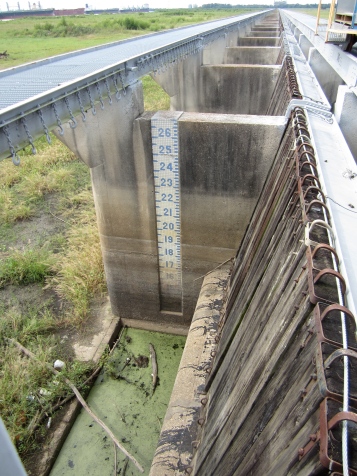 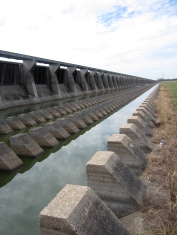 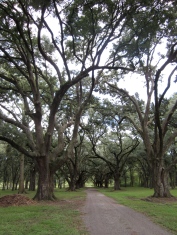 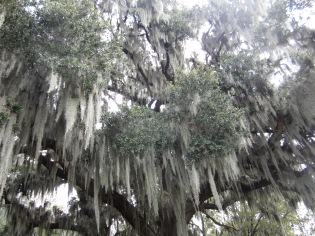 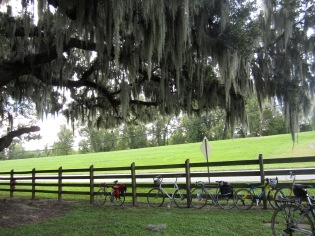 We woke to a very cold and rainy morning on Saturday and decided a rolling enclosure to take a lane down Highway 61 would be the safest bet. Everyone maintained a really great attitude considering we had three flats in the first ten miles and did a bit of standing around in the pouring rain, all waiting together. At one point a truck pulled up next to us and a little kid leaned out the window to ask me, “Are y’all riding for cancer?” I said, “No! We ride to Angola prison to raise money for folks to visit their incarcerated loved ones!” Lil’ guy looked super confused but gave an encouraging “Ohh!?” Once the rain finished at the first pit stop we split off into small groups to cover the remaining 45 miles to Baton Rouge. This is where you do your best friendship makin’ or deep thinkin’. It’s necessary to ride single file most of the way and there’s not a whole lot to look at. One of the veteran riders became a living PSA when she caught her knee on her handlebars and just toppled into Highway 61, cracking her helmet. After lunch and with everyone thankfully alive we started the last leg. By this point on the second day everyone was way tired but super determined. A nine year old and his mother did the ride and during one of the gas station stops at this point she caved on something he never gets at home: a Red Bull. He was soo happy. It’s a mix of uplifting and bizarre for most folks to realize how far from home they’ve gotten on a bike and I’m always trying to grasp the Louisiana around me that I so rarely travel through. The roadkill is much different than New Orleans too. That night, Baton Rouge activist Dawn Collins came to speak to us about her work there, especially around education. She read us a poem that she had written after Trayvon Martin’s death when she was left wondering what to tell her own young, black sons about how they can strongly but safely exist in this world. 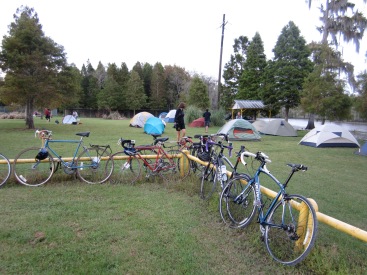 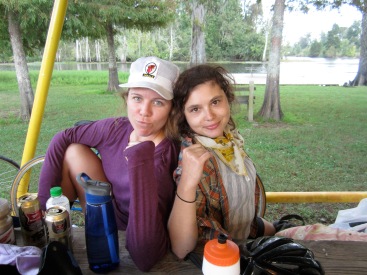 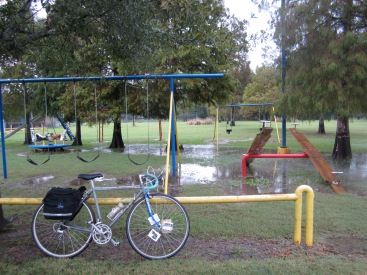 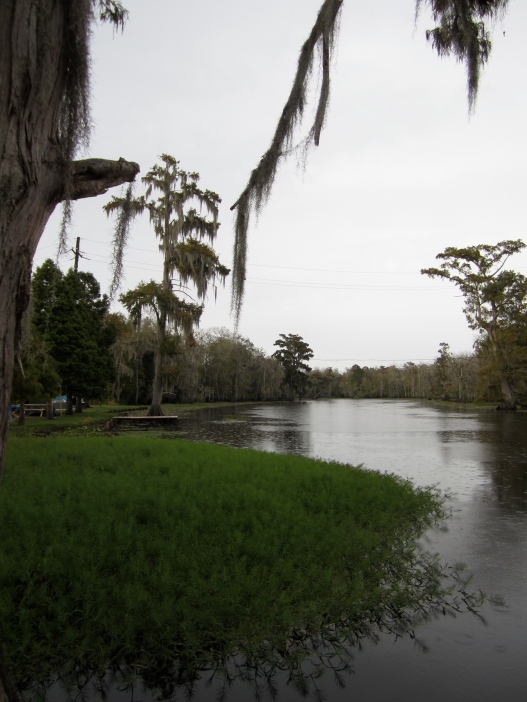 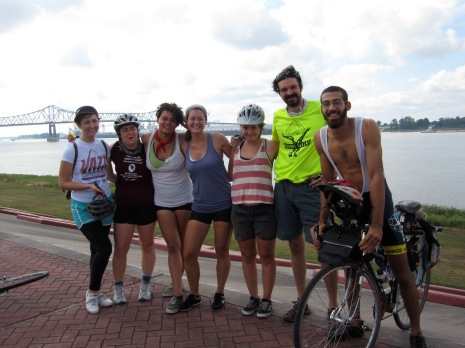 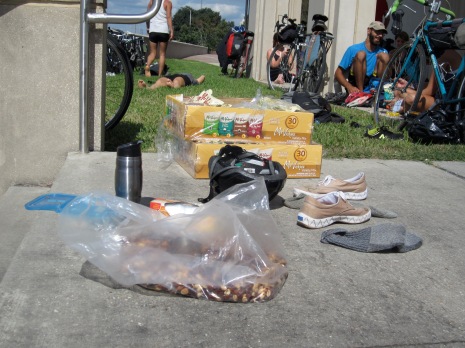 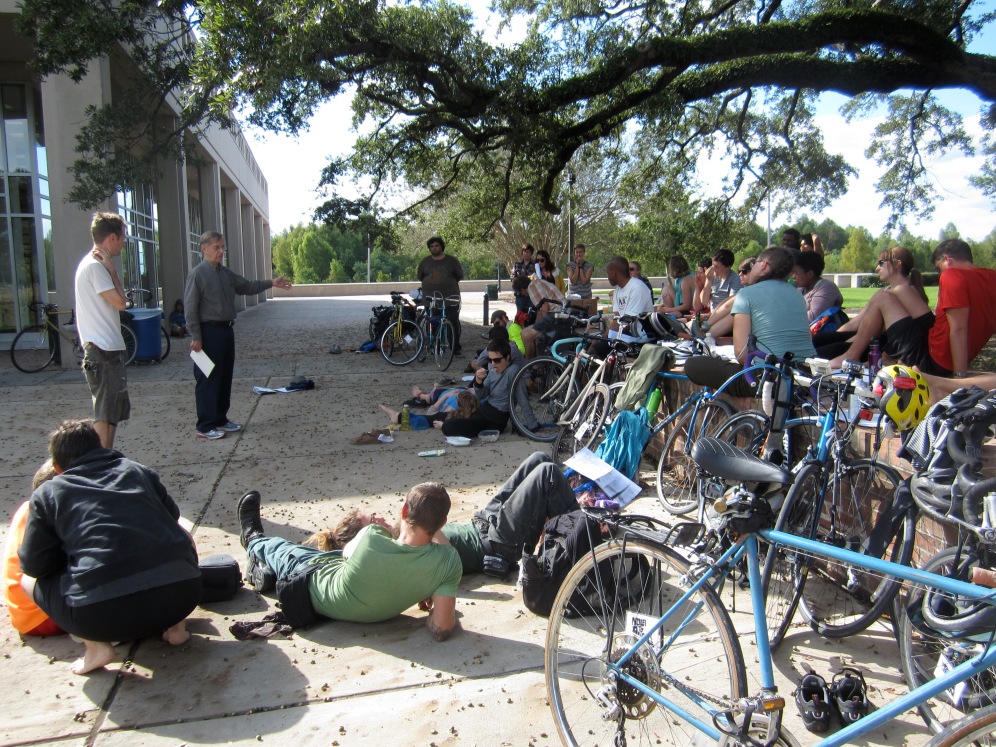 Up before dawn on Sunday, we shredded through the first fifteen miles of hills and trees, a dream ride. The sun was just rising and some of us remembered the way from our scouting ride months before so we took off and had a lot of fun in the front mashing it out. Unfortunately, the second half of the day down Highway 66 is more like a nightmare. Barely any shoulder, trucks headed for the rodeo barrel past, until they get to the absolute gridlock of cars that greets you for miles outside the gates of the penitentiary. Once inside, I avoided the rodeo and headed straight to the area of the craft fair where I knew my pen pal would be. 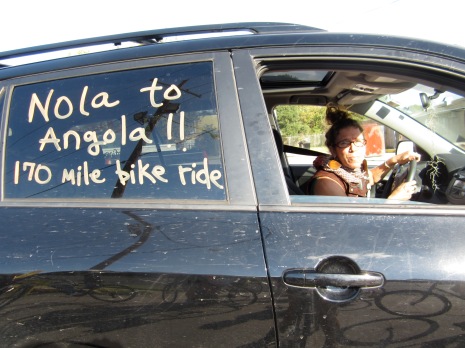 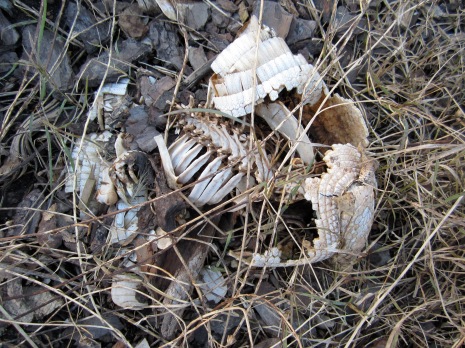 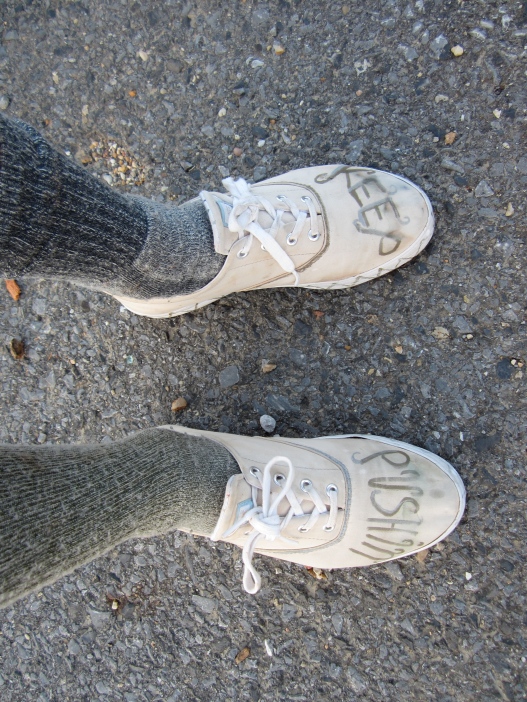 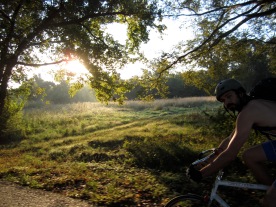 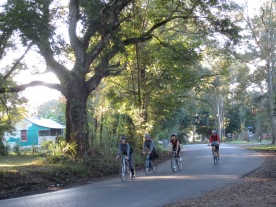 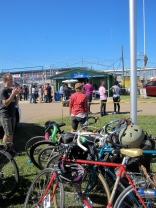 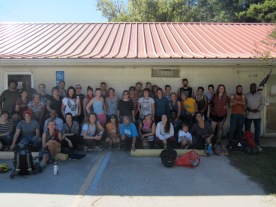 Mchawi and I have been writing for years and only just met for the first time when I arrived at Angola on 2012’s ride. He has no surviving family and this summer when (as a person without a car) I had the privilege to take a Cornerstone Bus to see him was only the second time in his decades at Angola that he had someone come for him during visiting hours. He and many of the other guys always thank us and Leo Jackson (the founder of Cornerstone) profusely for the service the buses provide. We were able to chat through a fence for a few hours before we had to head back to load all those bikes and humans into the vans back to New Orleans. The debrief was intense, as being inside a maximum security prison should be intense for anyone. Many folks shared how the ride strengthened their already developed ideas and others said they hadn’t really ever thought about the PIC before this and felt that now their eyes were open. I mostly just thought what I think everytime I go to Angola, that I can leave of my own free will whenever I want and Mchawi has to stay.

And that is at the heart of the ride for me. The ability to visit someone you care about that may never return from prison is such a small but important way that families can try to stay intact. Our posters this year had a tiny tribute to Herman Wallace, who died a free man after 40 years in solitary confinement, ordered released by a judge for a trial containing 14th Amendment violations just days before his death. I think of Mchawi and Herman and I think of Albert Woodfox, the remaining incarcerated member of the Angola 3, when I think of why this fundraiser and trip is important. When you think of how much further we have to go against a reality where racism, corrupt policing, a war on poverty disguised as a war on drugs and over-incarceration are actively destroying communities, 170 miles doesn’t seem like that far to ride.