Providence Hill Farm, situated in the gently rolling hills outside of Jackson, provided the most scenic race location thus far in the DSGP. Skies were overcast, and in a shocking development at this latitude, temperatures approached cold as riders took to the course for warm ups. But for the spongy grass and soft earth it floated atop, this would have been the fastest DSGP course yet. Instead, this very Belgian course was a brutal energy drain.

The wide open field, dotted with humongous hay bales was a playground for course designers Skip Town and Wes McWhorter to carve out a large, loose circuit with fast sweeping turns. A dirt descent leading up to a small roller created a passable jump, where many riders took the opportunity to put up some style points. One barrier, hidden behind a hay bale in the middle of a blind hairpin nearly took out several Cat 4/5 riders who did not pre-ride the entire course. Barriers seemed to be key to the challenge of this race. Positioned on both uphill and downhill as well as flat areas and in turns, the multiple barrier sections tested a variety of skills, and seemed to be where racers either caught or ditched each other.

The race was a hoot, and racing new competitors always builds good tension and creates new challenges. Sean Williamson told us that there was so much buzz generated by the race (in addition to the buzz generated by a keg of Andygator, generously donated by that super rad pair known as Jeremy and Paula Polk) that locals are looking at possibilities for building a more permanent and accessible CX course/park.

Since Race 2, Baton Rouge, several shakeups occurred among Cat 4 and 5 riders. Ryan Barnes (S3 Racing) received a mandatory upgrade to Cat 3, then announced he would be taking a break from cyclocross to prepare for road season. Matt Gandy (The Bike Crossing) voluntarily upgraded to Cat 4. He and Graeme Preston (4th Dimension Racing) have both opted to abandon Cat 4/5 and race the 4’s only. All of this shuffling has thinned out the Cat 5 field, made the Cat 4 race a hair more competitive as Gandy replaces Barnes, and perhaps prompted Preston to begin racing singlespeed in order to run two races. 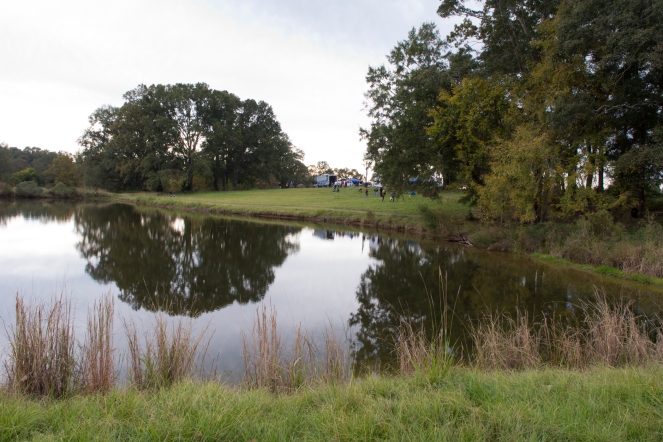 It was a pictureesqueasfuck location for a ‘cross race. Yep, you are sorry you missed it. 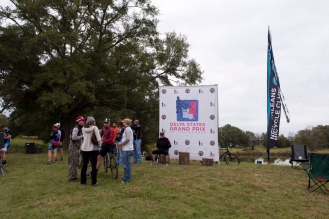 There Will Be Hay.

The holeshot was essentially a race to the first set of barriers, less than 100 meters from the Start line. Because there was no tight bottleneck, the pack stayed together for most of the first lap. Micheal Boedighemier (Rouler Racing) and Jonathan Crain (The Forge) broke from the pack and put down a considerable lead. Christopher Snider (Rouler Racing) and Richard Carman (Rouler Racing) battled for 3rd place in Lap 2, until Carman pulled away after Snider encountered pedal issues following an uphill barrier section. Injured from a washout in Race 2, Baton Rouge, he was ultimately unable to close the gap to the leaders, but finished uncontested at 3rd. Boedigheimer led Crain through much of the race, anxiously anticipating an attack that never came, and put the pressure on Boedigheimer to make a move. An attempted break by Boedigheimer in a downhill left hander resulted in a wash out and subsequent dropped chain. The crash cost him the lead for half a lap, but steadily he chewed up the gap and overtook Crain for his first victory, beer hand-up and all. 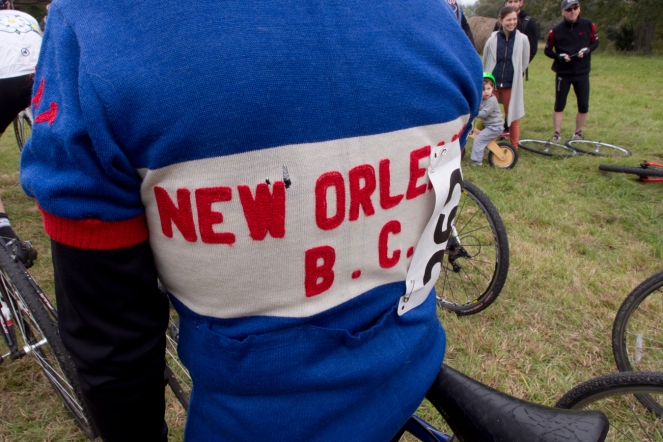 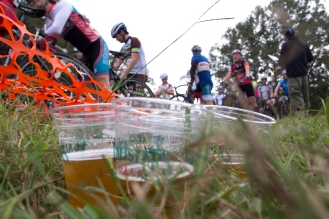 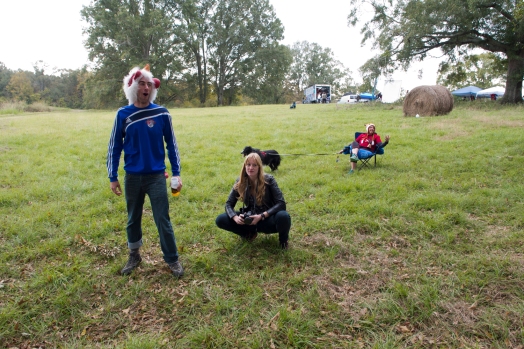 Someone Got Rad and I Missed It

If you’re not slobbering all over the place, you aren’t riding hard enough.

In SS, Graeme Preston (4th Dimension Racing) and Adam Morris (Absolute Racing) took off and shuffled position several times. Preston remarked that he was having difficulty gaining traction on the bumpy stretches, and suspected Morris’ suspension fork was a useful asset for keeping the rubber on the dirt. SS fixture Matt Gandy (The Bike Crossing) was unable to keep up with the leading pair, but received little opposition, and in typical Gandy fashion, provided more than enough showmanship to make up for any shortcomings on the leaderboard. In the final lap, Morris turned it all the way up to defeat Preston by a narrow margin.

Samantha Stein had another smooth race, taking home 1st Place, once again. Rosanne Simons (Nola Lending Racing) continued to be her main opposition. Allison Brown stole 3rd in her DSGP debut, riding a full carbon Litespeed road bike on slicks and sending a lesson to anyone who would blame poor performance on their equipment being ill-suited to cross.

Cat 4 Men
Matt Gandy (The Bike Crossing) brought the cavalry this week, with TBC fielding a formidable squadron. Gandy and TBC cohort Stewart Patrick took the holeshot, with Graeme Preston (4th Dimension Racing) and Adam Morris (Absolute Racing) hot on their six. As the race progressed, Stewart led Gandy away from the pack. The pair set a furious pace, while keeping relaxed enough to snatch handups and booty dollars (video of this later). With derailleurs at his disposal, Preston was able to drop the hammer on Morris, and set the score straight after their SS duel, cruising to 3rd. 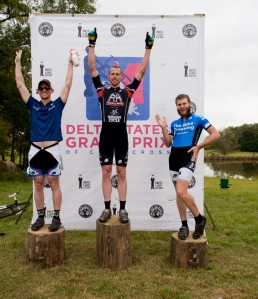 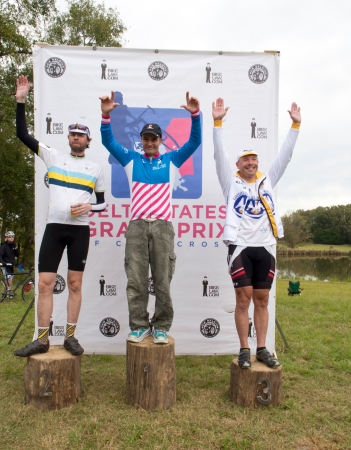 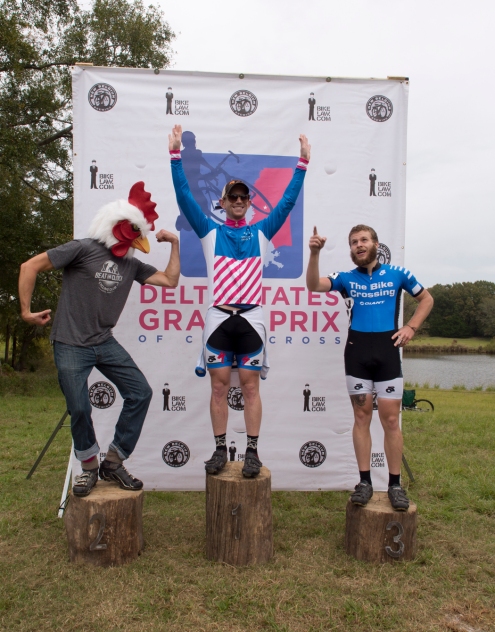 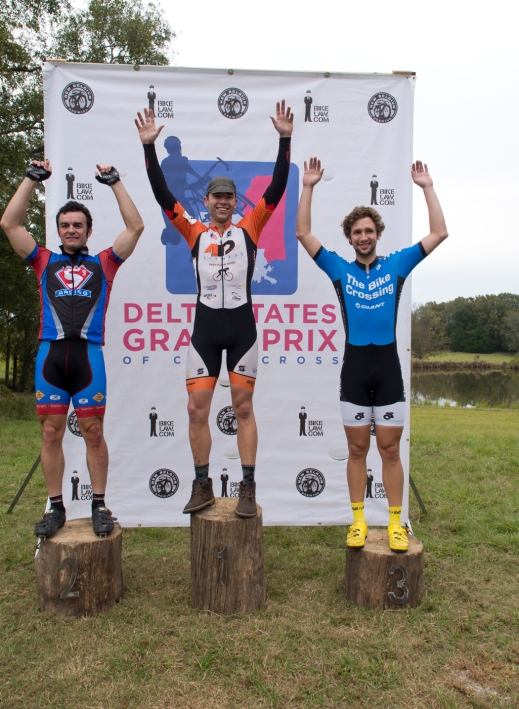 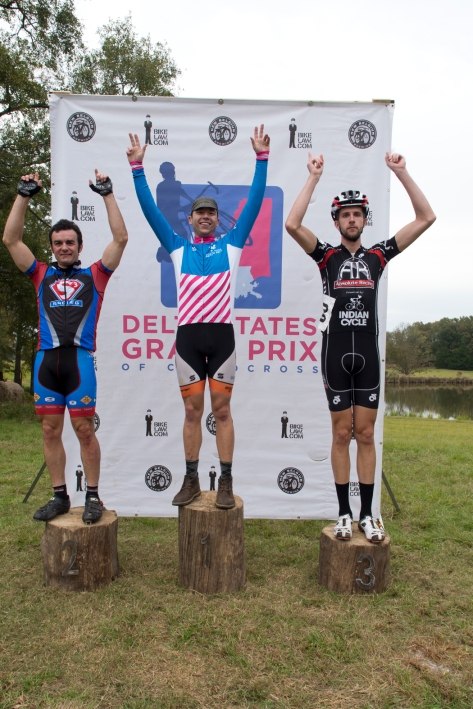 Jaden Kifer (4th Dimension Racing) hit the ignition, and bid farewell to the rest of the field. With this 1st place finish arriving on the heels of a 2nd place finish at Race 2, Baton Rouge, Kifer distinguished himself to be the man to beat, and a clear contender for taking the series Overall. Ed Novak put the pressure on Kifer a handful of times, but in the end was not able to overtake, crossing the line at 2nd. The real battle in this race was fought between Andrew Sorey (Absolute Racing) and Ross Livingston (The Bike Crossing) over the 3rd place finish. Sorey led Livingston for the first half or so, and managed to evade for a good bit as Livingston attacked, but was finally overtaken, and never seemed able to reclaim the upper hand.

Next Race
After a two week rest, racing will pick back up in Monroe, LA. Racers are being warned well in advance to expect copious amounts of sand. Like Lawrence of Arabia amounts of sand. Plan accordingly. Overall series leaders are solidifying their positions, but Monroe presents one last opportunity to shake up the field. The big dance is drawing closer, kids, so get your rears in gear and rack up some points with us.