Saturday’s race at Highland Road Park in Baton Rouge was a completely different animal from the season opener in New Orleans. The second race of the series took place under clear blue skies on a dry course beautifully designed by Blair Krogh. The circuit was a fast one, characterized by extended climbs, challenging turns of every variety from downhill sweepers to rooted out esses and tight grassy hairpins. Some climbs were protected by brutal uphill barrier sections, one of which came to be dubbed “Normandy”. Long sprinty sections on dry ground put the advantage back in the CX-bike camp, as well as emphasized the ability to hold a line through much faster corners. 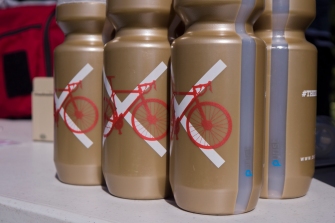 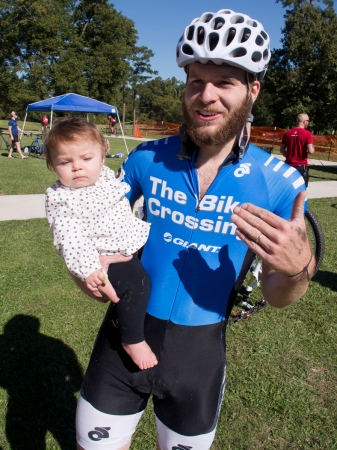 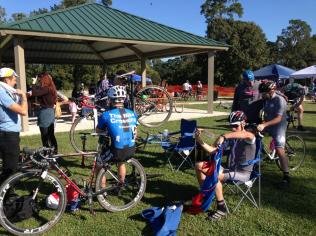 Unfortunately we did not get to see Richard race in his Spidey suit. Photo by Murat Celebi 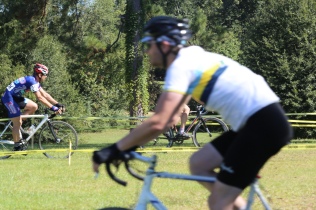 Barnes in the Turn

Sudan in the Turn 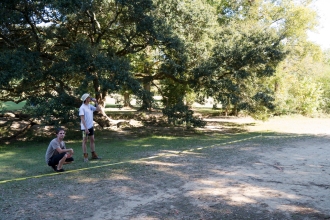 Where do you keep your dollars? Looking at you Christine!

Rusty’s telling Bjarne, “You gotta upgrade to a cross bike.” 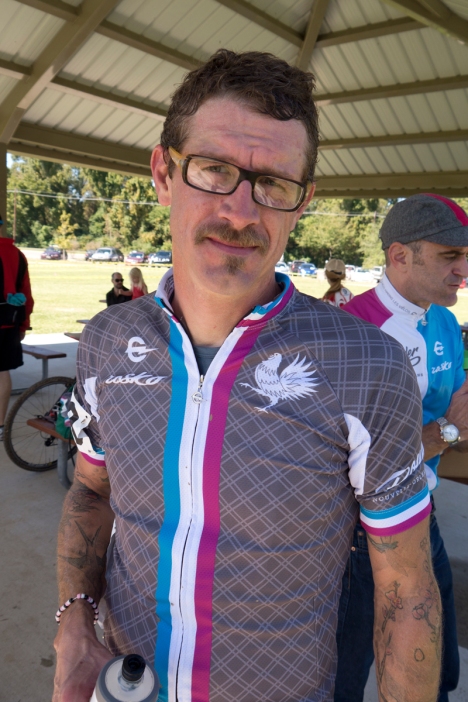 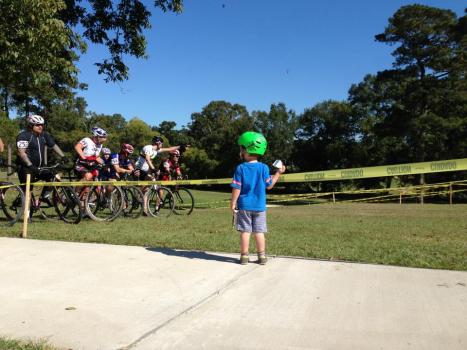 Our DFL getting in some weight lifting. Photo by Bjarne Kris Haug

Handups are not a crime. Photo by Bjarne Kris Haug 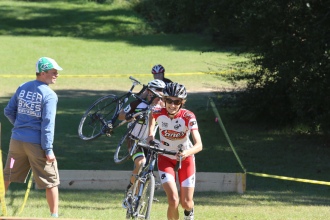 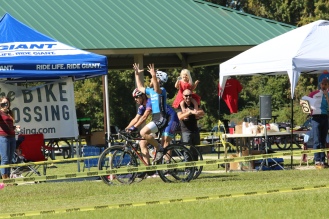 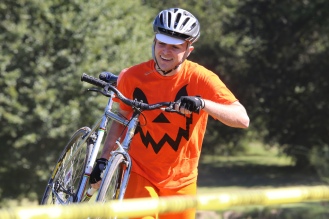 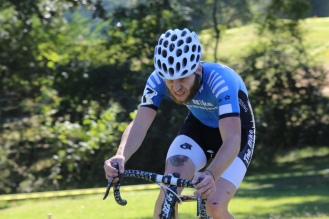 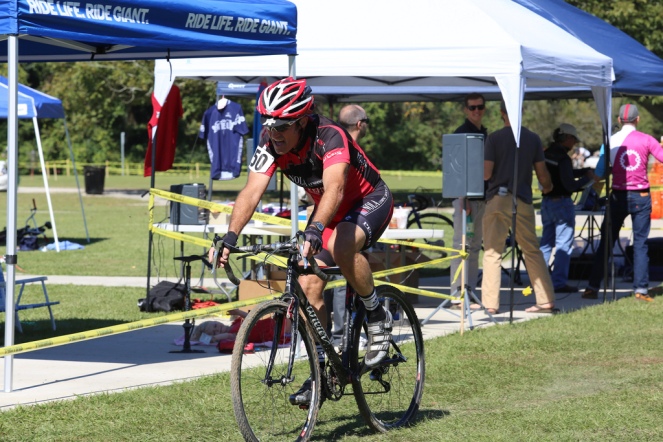 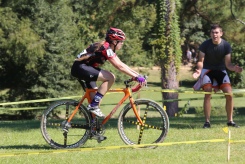 Yes, Travis, you are done. Photo by Bjarne Kris Haug 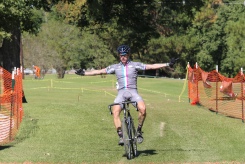 Even race directors can have fun. Photo by Bjarne Kris Haug

Cat 4/5 Men
Devilishly planned, the holeshot was a sharp right hander followed immediately by an extremely compact chicane. Matt Gandy (The Bike Crossing) went down in turn one causing a massive pileup. Ryan Barnes (S3 Racing), Micheal Boedigheimer (Rouler Racing),  Graeme Preston (4th Dimension Racing) and Kris Haug (NOMAMBO/Eastbank Cyclery) were fortunate enough to clear the crash and build a gap. Haug, who claimed to be attending “just for exercise,” then fell back behind Preston and Richard Carman (Rouler Racing). As the nerves settled, Barnes, Gandy and Boedigheimer built a lead and battled for position before Barnes turned up the heat in the end and ran away with first. Preston, who took first at Race 1, New Orleans, laughed off his 4th place finish, remarking “I went off course like 4 or 5 times. I tore up a stake, I went into the ditch. I bottomed out my [52T] chainring. I was a mess.”

In the singlespeed race, Gandy took the win again, this time with a bike throw across the finish line. Travis Johnson cruises to third in his first cyclocross race.

Rusty Bernard (Nola Lending Racing) switched to a cross bike for this week’s Masters race, but was still unable to fend off Woody Boudreaux (Herring Gas Cycling), who pulled out a 1st place. Matt Kyte (Semi-Tough Cycling Club) locked down 3rd once again this week, making himself a fixture on the left side of the podium.

A bottleneck at the the first barriers set Charlotte Fournier back while allowing Christine Moser (Rouler Racing), Samantha Stein (Raising Cane’s Racing) and Rosanne Simons, winner of Race 1, New Orleans, to escape with top three positions. Two laps out from the finish, Fournier caught Moser at a barrier and managed to overtake. Meanwhile, Stein and Simons traded punches until Stein opened up in the final lap to snag the win.

Cat 4 Men
Once again, Ryan Barnes (S3 Racing) opened up a gap and never looked back. Robinson Sudan (Rouelr Racing) and Graeme Preston (4th Dimension Racing) competed furiously for 2nd, until Preston went down hard on his drive-side, torquing his derailleur into his spokes and forcing him to retire on a mechanical. Skip Town found himself leading early in the race, but had to cut the pace and drop back to third when he came too close to tossing his cookies. Podium finishers were spaced out considerably, each finishing uncontested in his respective position.

Will Sheftall (Raising Cane’s Racing) had his way with the field, and seemed to post successively faster lap times through the race. Jaden Kifer (4th Dimension Racing) makes up for mechanical setbacks in Race 1, New Orleans, clenching the 2nd place finish. Ed Novak, who took 2nd in the 3/4 category at Race 1, New Orleans, took 3rd. 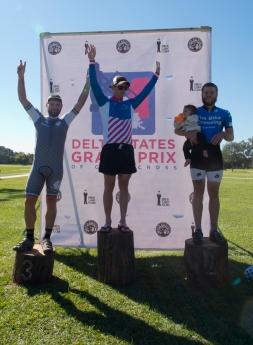 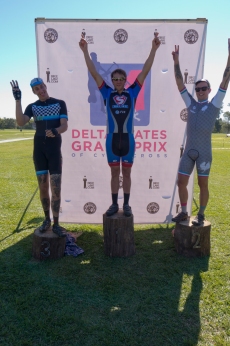 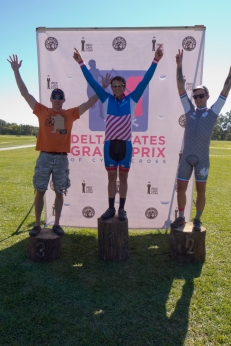 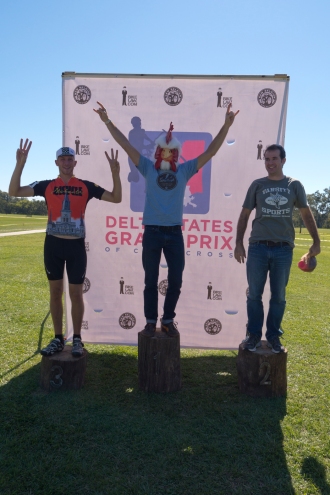 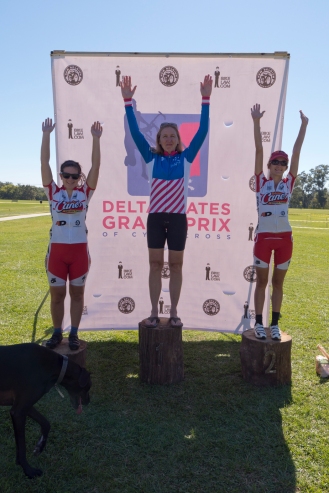 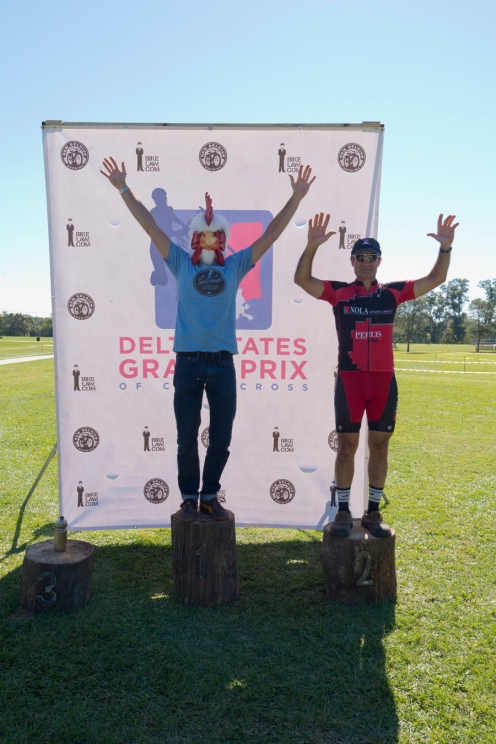 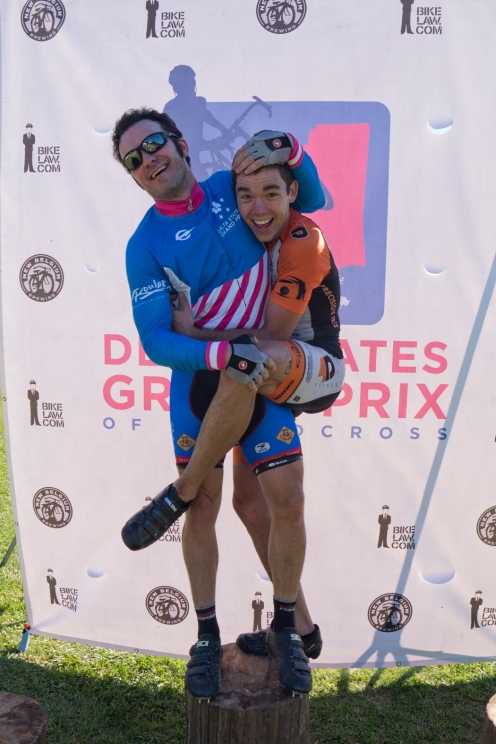 All in all, another fine weekend of racing. Many thanks to volunteers and sponsors for making this leg of the DSGP happen. Full race results available from LAMBRA.

Next Race
Saturday, November 9th, the show goes on the road all the way to Providence Hill Farm, outside Jackson, Mississippi. The Jackson race will mark the half-way point of the season and will be important to riders vying to secure their standing on the leaderboard. The course is being constructed on a large field, offering good vantage points for spectators, and beautiful scenery for all. Wes McWhorter has hinted at new challenges and obstacles facing riders. The weather on race day is projected to be cool and dry, but showers earlier in the week may provide some mid-season mud.

Can’t wait to see everybody out there!