Rougly one solar orbit in the past, when the Earth was in this same general location and position, I was sitting down with Boedi at a coffee shop to discuss a possible pet project collaboration. Boedi and I had met and become friends the summer before, ripping around on tarck bikes, racing alleycats, and once even showing up for the Tuesday Time Trials on the lakefront on said tarck bikes.  Quickly it became apparent that we had a similar vision for what the biking scene in New Orleans could be, and how we could use our powers to make it better.

So we sat down to lay the foundation for what would become Yeah You Ride. We had no budget, and only the most nebulous of ideas about what we would do with a blog; what type of content we would create, who our audience would be, how we would promote it, etc. But one thing was clear. Boedi and I were both competitive, and racing was going to play a big role in what YYR would be. Before we had a name or a web domain, we had a plan for an alleycat race. That race, Spring Brake Yrself, was a huge success in our eyes and shaped what was to come in many ways. We had no idea at the inception of YYR just how far we would delve into the world of racing, or how many possibilities this project would present us. 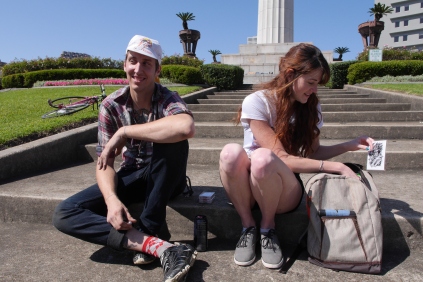 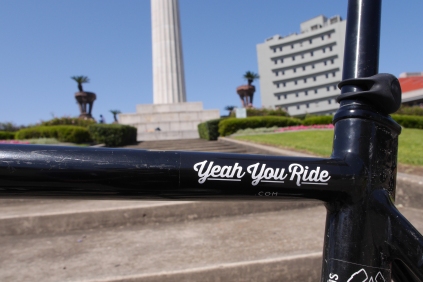 If there was a prize for “Best Head Protection”, obviously this would have been our winner. 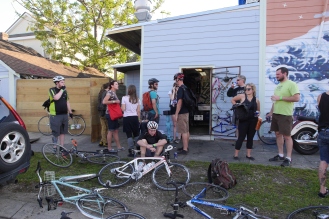 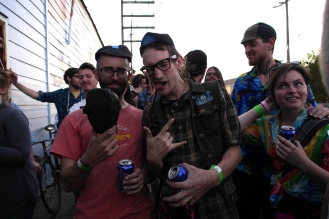 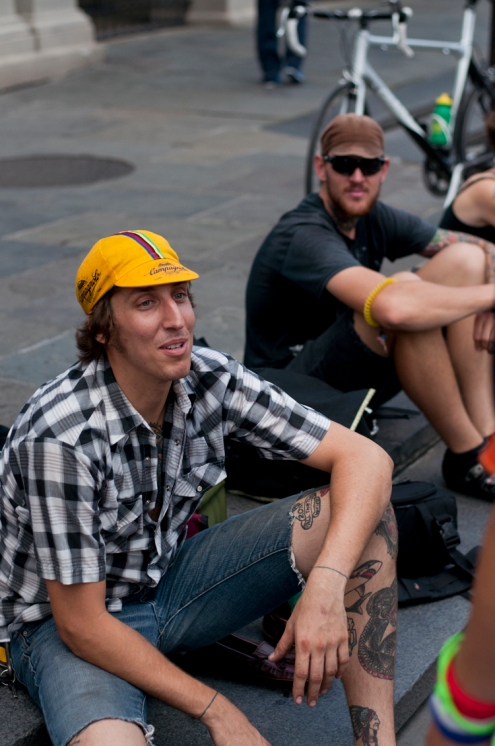 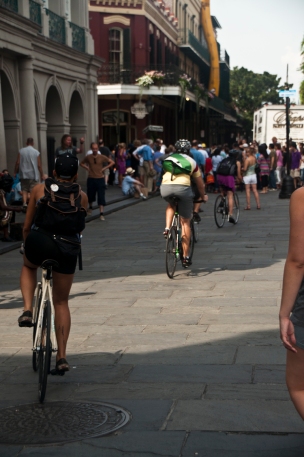 Here we are, a year later. 300+ beautiful followers on the Facebooks, and going into our first real road season as part of a USAC team. We never dreamed we would be here on that cold winter day that YYR was born. We never thought we would do a lot of the things we did this year, like ride a bike with gears and brakes, shave our legs, or refer to ourselves as ‘cyclists.’ It’s been a year of firsts, and hopefully a few lasts, ups, downs, ins, outs and all around excellence.

Before we say anything else, we’d like to say Thanks. That’s capital-T Thanks to everyone who is reading this, who has ever read any of this banter, and especially those who have read it and despite better judgment will continue to read it as long as it may pervade the internet. Thanks to all the racers who have come out to our alleycats, goldsprints, cross races, and other cycling fiascoes. Huge thanks to the shops and businesses that have sponsored and supported our events. Not only would YYR be impossible without your attention and support, it would be utterly pointless. We love you and can’t wait to see what 2014 brings.

But before we rush headlong into this annum novum, lets take a pause for the cause and reflect on the madness that was Year One.

Yes, this was his third flat. He was lucky I somehow missed the second. 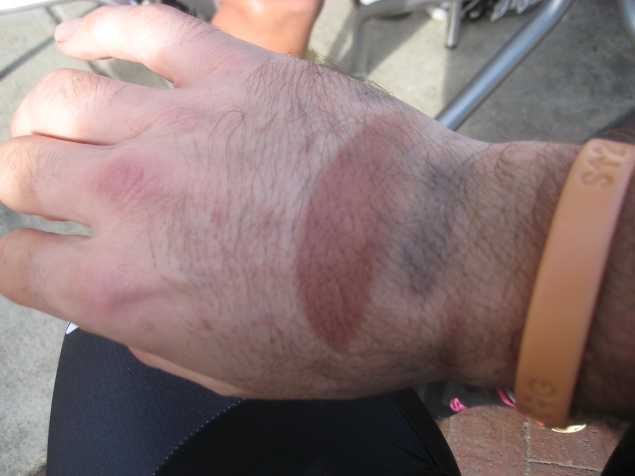 Already out the door, I had forgot something important. 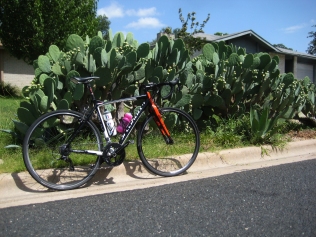 This must be the place. 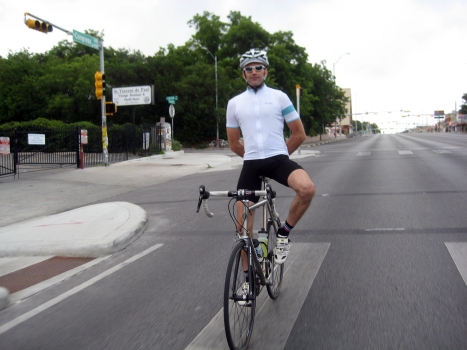 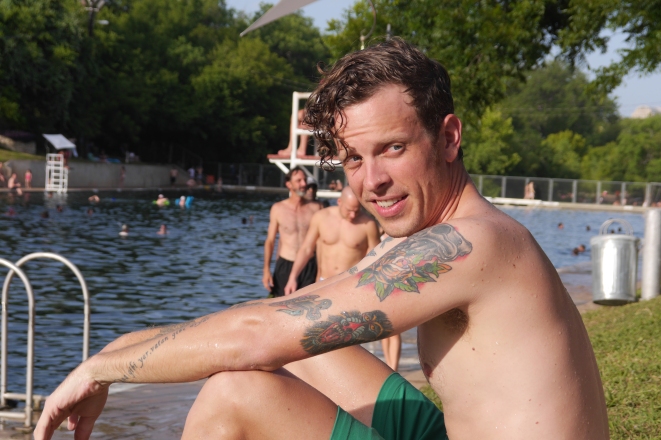 Zip up and mug for the sponsors. 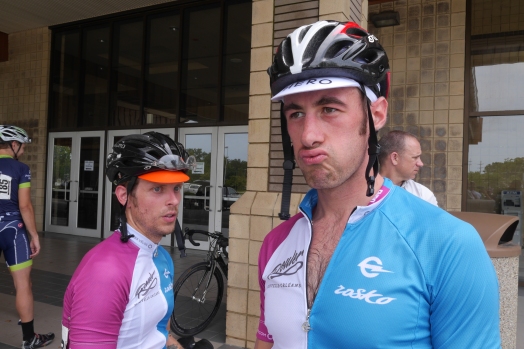 Spring Brake Yrself 2013
Our maiden voyage in alleycat planning, or really doing anything organized, for that matter, was pulled off without a hitch with a lot of help from awesome volunteers. We managed to draw out a crowd of 67, including 2 tandems and a pedicab, on a beautiful April afternoon. The race seemed really well received by all competitors, and we believe enforced a standard for how rad an alleycat should be. One of the greatest measures of success, in our estimation, is the afterparty. People stuck around 12 Mile Limit for a long time, mingling, putting away more than 200 free New Belgium beers, and chowing some choice BBQ. This is what we wanted to see from jump. Strangers coming together over bike racing and having a bitchin’ time. This was when we first started believing we could make something happen with YYR.

YYR Goes Quasi-Pro
When we started tooling around on road bikes, I don’t think there was any real endgame or primary objective in sight, aside from the deep seated urge to always get faster. Being part of a real racing team hardly seemed like an option for a bunch of greenhorns like ourselves, but soon we realized how necessary banding together was for winning, and we like winning. Drawing on some great friendships formed through Semi-Tough Cycling Club’s “Tuesday Loops” training ride, and some solid advice from our new friends in Austin, Beat The Clock, we laid the groundwork for what would become our team. All that was missing was a sponsor, and in typical fashion, the universe did provide. Wes McWhorter of Rouler had been harboring a dream for many moons of having a race team to call his own. With Rouler’s social mission of lowering the bar to entry for competitive riding, and YYR’s background as ex-messengers and track bike goons turned legit racers, our visions seemed to dovetail perfectly. Before we knew it, we were part of a real, live USAC recognized team. While I never dreamed it would happen, it is a dream we have been living since early last fall. 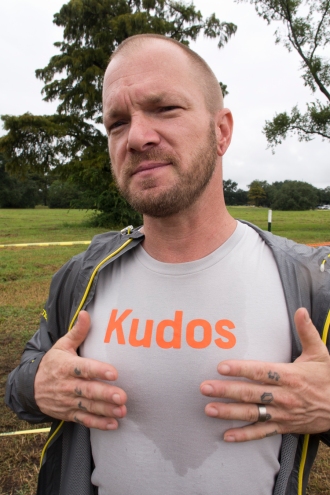 Muchos kudos to Chris Reed who not only made the barriers and podiums, but the championship trophies as well.

Moser is doing it right. 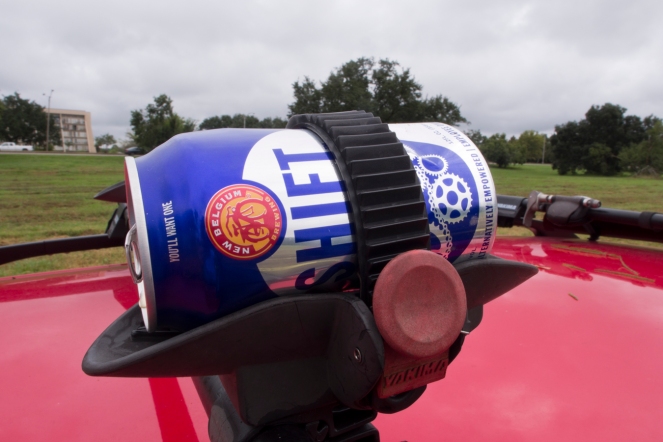 Skip takes care of us. 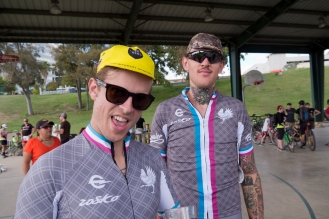 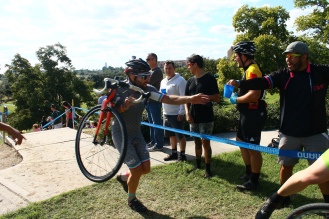 Your humble blogger… Photo by Doogie Roux Check out more of his photos here: http://www.rouxbikes.com/apps/blog/brcx

Chris “Hambone” Snider gets stuck in the sandy scrum. Photo by Doogie Roux Check out more of his photos here: http://www.rouxbikes.com/apps/blog/brcx

Skip and Rob ascend Mount Heckle. I think this is where Skip rolls his ankle. Photo by Doogie Roux Check out more of his photos here: http://www.rouxbikes.com/apps/blog/brcx

I’m a fan of little grocery stores that sell tons of healthy snacks and sparkling water, so finding Lolita’s just down the street from our Air BnB was awesome. Oh, and they sold breakfast burritos. 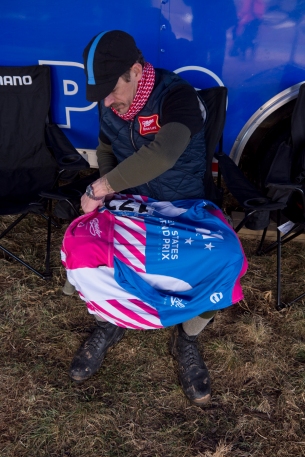 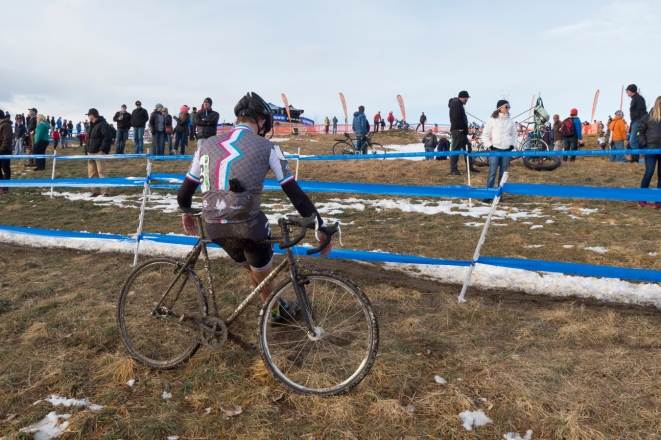 Valmont Bike Park from the top during the morning pre-ride.

The Mud and The Blood and The Beer
“I don’t know if this cyclocross business is for me. . .” I told Robinson one day while we were slaving over transforming an abandoned golf course into a CX field of dreams. Fortunately, we were too invested in greenskeeping by this point for me to back out. Boedi and I fell madly in love with CX. Everyone involved with DSGP worked really hard, and it proved to be a really awesome opportunity to make new friends and rivals across the LAMBRA district. Next season promises to be even more exciting, with an expanded racing schedule, including the possibility of double-header weekends and night races. This has been, and will continue to be a project we are stoked to work on.

It has been a peach of a year and we dug every minute of it with you. Keep your eyes on us in the year to come, as we put together some top-notch events and continue to bring you all the dirt on bush-league racing in New Orleans.