Waking up to snow dusted foothills and fresh mountain air definitely put a spring in our step on Tuesday as we went about getting everything together for the following busy race day. I was in search of some new tires as conditions looked to be either snowy or muddy, but certainly not dry. After a full season using second hand tires, I felt Nationals was a good excuse for an upgrade. A nice gentleman at Excel Sports Bikes helped me spend lots of money trying to get one more race out of my Crux after a season of beatings (I’m pretty convinced cyclocross was invented by the BIG BAD BIKE COMPANIES {or Tim Johnson} to get more money out of roadies in the off-season as ‘cross just destroys bikes). We then visited another cool shop, Boulder Cycle Sport and were hooked up with some info on local rides. Our last stop was a shop full of good vibes and cycling history: Vecchios. You could spend most of your day looking over the cycling artifacts, drool over the Moots bicycles and share jokes with the employees. Definitely worth checking out if you are ever in Boulder. 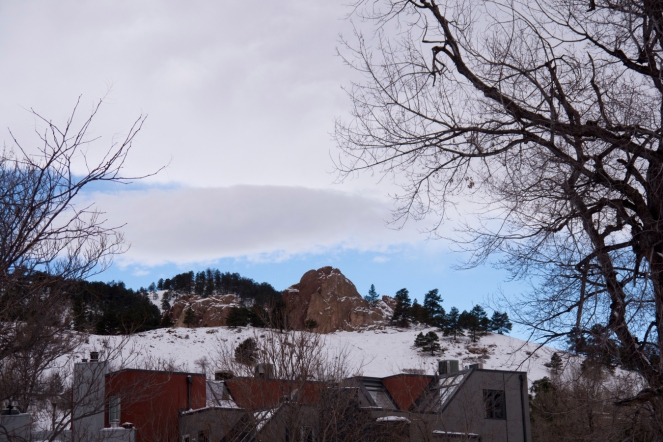 What a nice sight to wake up to.

I’m a fan of little grocery stores that sell tons of healthy snacks and sparkling water, so finding Lolita’s just down the street from our Air BnB was awesome. Oh, and they sold breakfast burritos. 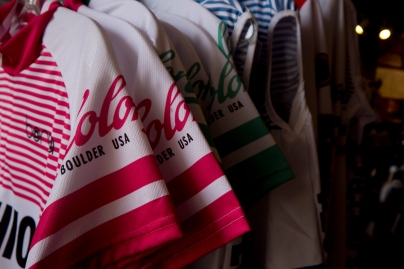 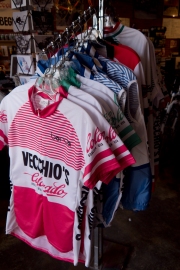 Had to get a Vecchio’s vest. 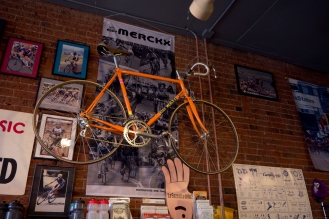 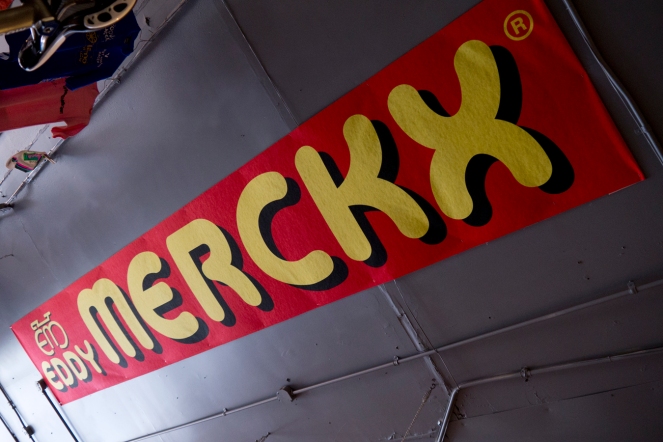 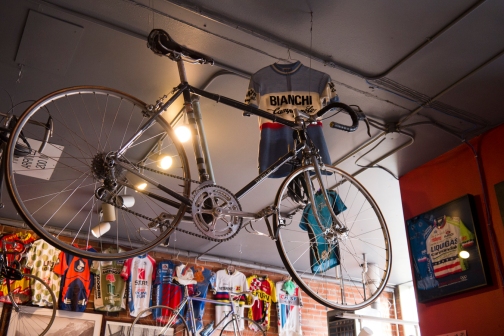 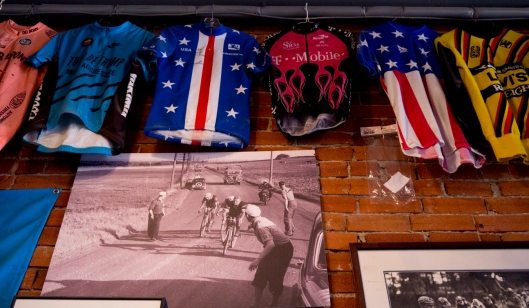 Wes planted the flag as soon as we arrived. 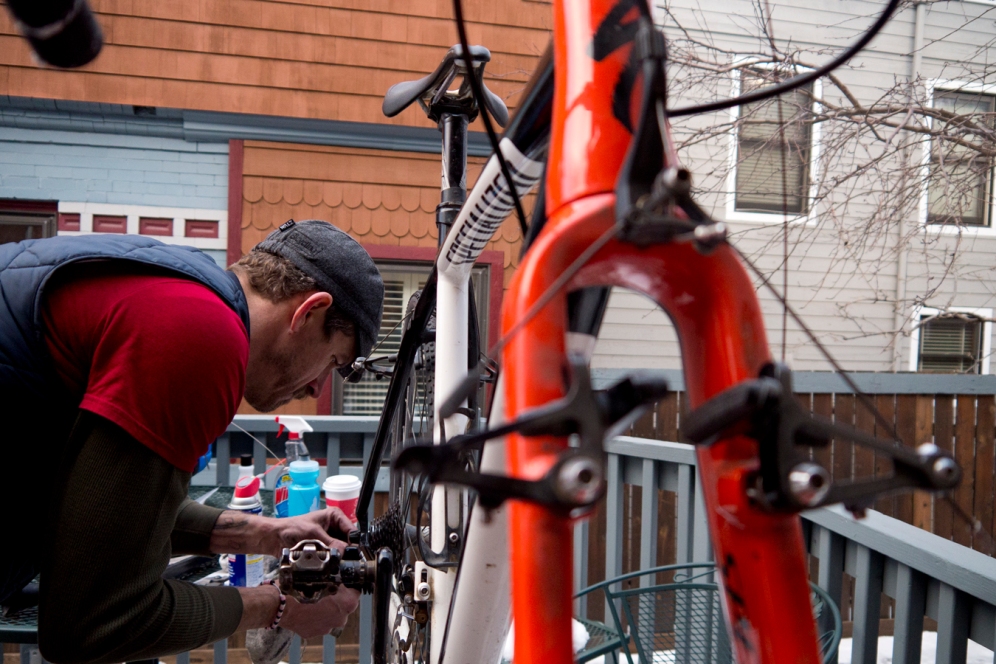 And went to work trying to correct some of the damage from Austin.

Race day arrived! My racing experience at Nationals, if anything, was short, so at least it took place in a beautiful setting. The race took place at the Valmont Bike Park, 40 acres of city owned land with great views of the Rockies. With the park set on the side of a hill, it allowed for some scary descents and punchy climbs and one brutal off-camber right hander dubbed, “Pete’s Plunge“. The second part of the course took place at the bottom of the hill and feature a big sand mound (much like the DSGP Natchez course), tight technical spots, flowy turns and the Belgian Steps that made their way through a beer garden. The course was a spectators dream with tons of great heckling points, but since it was a bit early in the week, crowds were minimal.

After going back and forth about proper PSI and hoping that the snow and ice from the morning had softened, I finally headed down to the start. I was pretty much all the way in the back and didn’t hear my call up until there was just a few riders left. The only goal I had was to not break anything and possibly even finish above where I was predicted. The gun went off and it seemed like it was 30 seconds before I was able to clip in and start pedaling. I heard people laughing at  the ridiculousness of starting near the rear of a 120 person field.  After the hole-shot, there was a long climb that was covered in tire-deep soft snow with some frozen ruts. Some people started running at this point, which looking back, was probably the best idea. Stubbornly, I rode all the way to the top, losing a few places as I veered off in the deeper snow a few times. After reaching the top, there was a steep downhill right hander that had been completely frozen earlier (people were walking it in the morning). Probably the scariest descent yet in my short cyclocross career, I got to the bottom and wiped out. After remounting my bike and riding it towards the famous “5280′ Run-up”, I noticed that my front tire was completely flat. Not really sure what to do and not ready to give up on my “Nationals” race (I had just driven two days to do this!), I shouldered my bike with good form and gave one last sprint up the stairs. At the top, I put my bike down, confirmed I had a flat, and started walking. I got a few nice consolations of “Bummer, man!” and I ducked under the tape to find myself near the finish line, cheering on Wes. 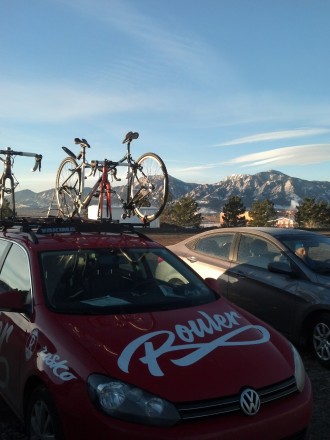 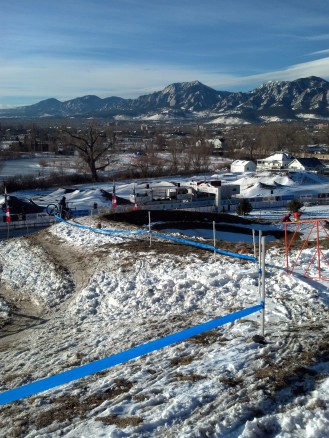 Valmont Bike Park from the top during the morning pre-ride. 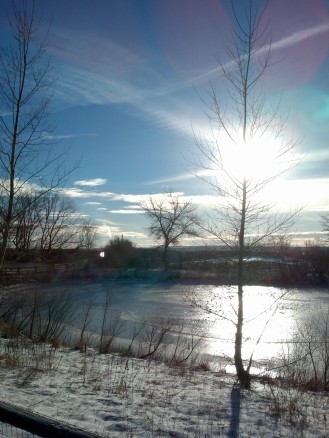 Yep, that’s a frozen lake in the middle of the course. 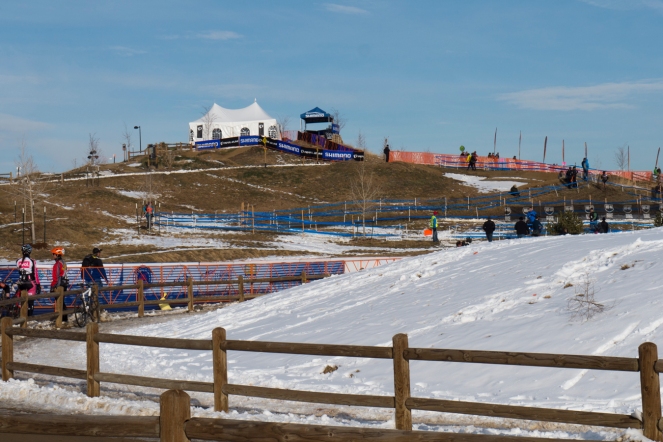 Conditions thawed out in the afternoon. 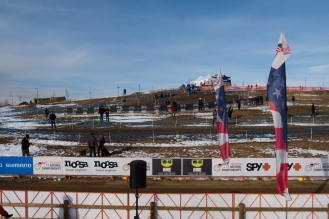 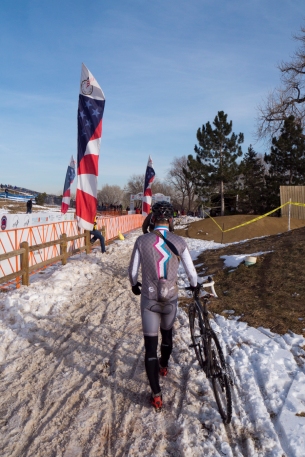 These Spot bikes caught my eye.

Do they use UCI points in SS? Wes lining up near the rear. Ok, the rear. 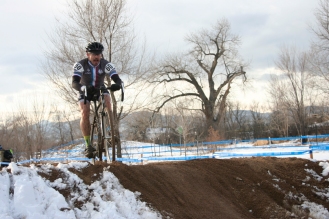 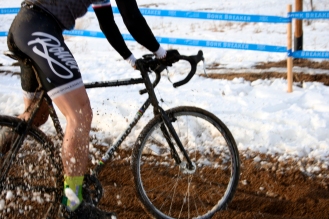 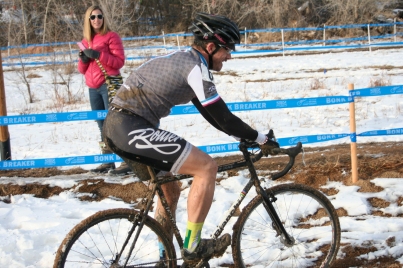 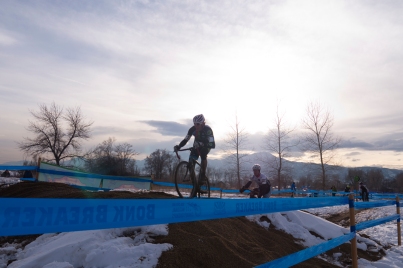 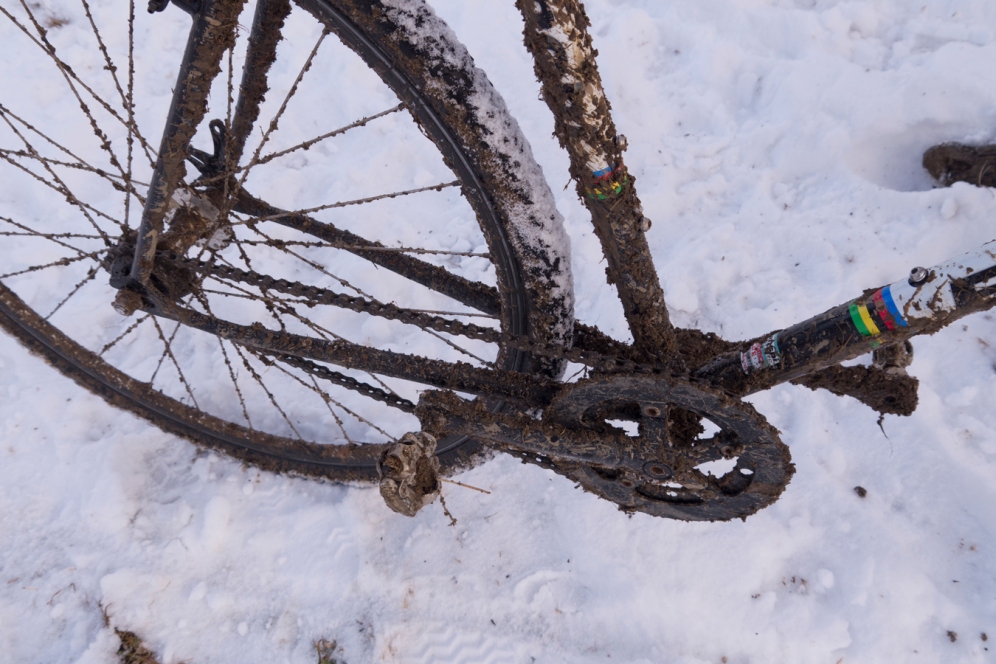 Later in the day, Wes raced in the SS Championships and Rob and I acted as personal photographers and soigneurs.  I know he wasn’t expecting much, but he did manage to pass a few people before he was pulled, take a beer hand-up (which I have on video – more of that later), and not finish DFL. Oh yeah, he also had a huge smile on his face the entire time. I’d say that’s a victory right there!